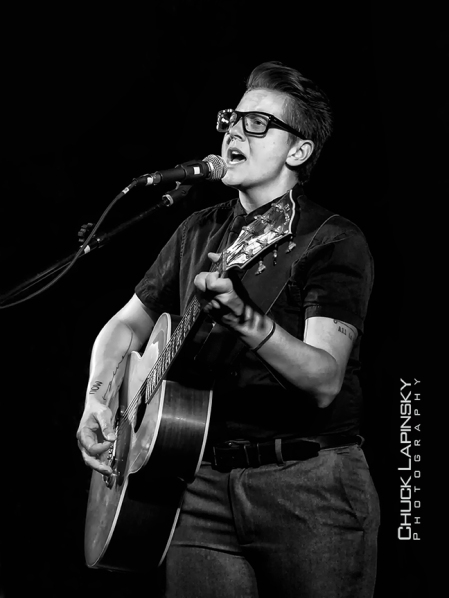 Veronica May is one of the most powerful wordsmiths in San Diego. She writes songs about most any subject, including some of the most personal aspects of her life. She is a singer-songwriter and performer who is respected and loved by everyone, both in the music scene here in San Diego or anyone who has seen her live shows or listened to her music.

Veronica grew up on a farm in Colorado. Her parents were in a band together in the 70s, and her mother played in an all women’s band in New York in the 80’s. Veronica visited her father regularly after he moved to New York City. Her mother played concert piano and her father played guitar, so she was always surrounded by music. One of her favorite memories was laying under the concert grand piano on winter nights while her mother practiced her classical piano. Veronica said that her mother’s piano teacher was the first woman to ever conduct a symphony orchestra.

Piano lessons came from her mother. Veronica practiced piano while her mother would listen and call out what was missed and what needed to be corrected from the kitchen. Veronica never wanted to play guitar and it wasn’t until her father gave her his guitar that she started to play because she knew how important that guitar was to him.

Natalie Cole and Nat King Cole were two of her earliest influences as her parents played music by those artists at home. It wasn’t until college that her musical ear began to expand into other genres. She loves and plays forties music, rock, r&b and even folk. Depending on the moment she can write in all of these genres.

Veronica’s music affects the listener differently, depending on which vehicle she uses. She performs as a solo artist and also with her band “The Veronica May Band.” When performing solo, her songs come across as an intimate conversation between her and the audience, while when performing with the full band, those same songs carry a completely different dynamic that can change that message. She sees her life in extremes and attributes the ability to transform back and forth to her living with Bi-Polar I disorder which causes great highs and lows that are reflected in her lyrics. Both sides of that dynamic are very important to what she writes and how the songs get performed.

Her two main mentors were her mother, and a singer-songwriter from San Diego named Jeffrey Joe. Known to his fans in San Diego as J.J., he was a larger than life musician who influenced many artists before his passing. Gary Clark, Muddy Waters, Stevie Ray Vaughn are also artists that influence her music. “The fabric of what and how I play and who I am, is influenced by the people I know.”

Her empowerment comes from what she believes in and she uses her music as an educational tool to promote understanding of mental illness. Veronica works with music educational groups such as Ladies Rock Camp and Rock n’ Roll Camp for Girls San Diego, and was a musical therapist for eleven years. She sees how the power of music can affect and empower others. Veronica says “If I didn’t have guitar or music I don’t know what I would do…how I would get all this out. Music is my survival tool.”

There have been many highlights to her career such as winning a San Diego Music Award one year, performing with the San Diego Women’s Chorus, Jason Mraz recording on her album, and recently Columbia University wrote a play on her life using her music. She recalls that “those magical moments are hard to remember sometimes when you are in the trenches in a shitty bar gig where no one is listening. The music business is like a roller coaster.”

Veronica’s main mission that she expresses through her music is to educate people on Bi-Polar issues and engage conversation about it so people can better understand mental illness. Veronica is in the process of writing a book on this subject as another tool she can use to educate people. Saying “Having this illness changed my life for the better. It gave me a path. Tragedy gave me a path forward.”

Over time, her music has evolved from being a sort of stream of consciousness to something more structured. It is different now and easier for people to understand. She hopes that people take away hope from her performances, and realize that they are not alone.

Recently she released her single and video “Rise” which is a political statement. She also has plans to tour next year and has begun new side projects with some local musicians from San Diego. She has another album named “Her” in the works and all the songs are love songs.

Right now Veronica is in a breathing mode and not booking a lot of shows, as she finishes up her book and some children’s books she is working on. By January-February 2019, she will be booking show dates again.

You can catch Veronica May live as part of the Randi’s Damn Jingle Ball show on December 2, 2018 at the Grassroots Oasis, right here in San Diego.

You can also find her on facebook, iTunes and soundcloud.